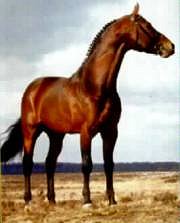 Wolfgang gave a striking performance in Ermelo. He earned 9 for his jumping style under saddle,or his stable manners and his work ethic. His off-spring consists of, among others, the overall champion at the brochure show at Drenthe and the most expensive horse at the 1990 Holland sale, Donald (Dfl 84,000). Wolfgang put his stamp at the VSN finals, on which occasion 3 of his progeny finished in the top 5. At the World championships in 1995 his son Illusion won the 5 year old championships. Wolfgang is a son of the legendary 'preferent' Farn. Farn is well represented through approved sons, amongst which is the world renowned Nimmerdor.

Wolfgang is a son of the legendary "preferent" stallion Farn (by Fax I). Farn is well reputed through his progeny in show-jumping, such as Odin N., Black and White Design, Trust Me, Nimmerdor, Opstalan's Pasquino, Olympus, Put Optie, Sheffield, Orlando, Talman and Optiebeurs Investment, and as a grandsire of, for example, Felix. Farn has several approved sons, amo-ngst which the worldfamous Nimmerdor. Wolfgang's dam is the very attractive "keur-preferent-performance" mare Jolanda. Her sire is the thoroughbred Erastosthenes xx. He produced such well-known offspring as Iwan F, Hala NB, Cyrano, Horatio, gamin, Oscar and I.Socrates. In the third generation we find Uron (by Nelson). Uron is a pre-eminent example of a Gelders stallion which has put his conformation stamp upon breeding. Wolfgang's full sister, Zwaantje, won several natio-nal 1.40 meter competitions with Pieter Kersten.

Wolfgang gave a striking performance in Ermelo at the Performance Test. He earned nines for jumping under saddle, stable manners and training behaviour. For both the cross-country and the driving test he was awarded a figure 8,5. In the national stallion competition he was very successful with Henk van den Broek. Wolfgang's offspring includes various approved sons in Europe as well as many international showjumpers such as Extreme with Lesley Burr, Frederic, Goldrun II, Fior, Freedom, and World Champions at Lanaken Illussion and Kigali. These famous children of Wolfgang have been winning at Grand Prix level and World Cups. One of the most famous offspring of Wolfgang is Michael Whitaker's Handel II. They achieved the unthinkable results in Stuttgart by winning both the Grand Prix and the Masters. Wolfgang also has several offspring doing well in dressage. Both Jester with Kebie v.d. Heijden and Whinny Jackson compete at Prix St.Georges level. Wolfgang is a beautiful "allround" stallion that produces both dressage horses and showjumpers.