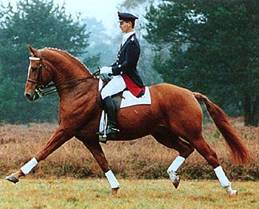 Weltmeyer (World Cup I) is considered to be one of the All Time Great Hanoverian sires. With his breathtaking movement and presence, Weltmeyer won his Stallion Performance Test in 1987 placing first in dressage with 143.94 points and third in jumping with 141.44. In 1989, he was Stallion Conformation Champion and DLG Champion and in 1998, he was named "Stallion of the Year". As a sire, Weltmeyer has proven himself to be a producer of Champions. To date, he has produced 70 Approved sons, 242 State Premium mares and countless top riding horses. It is no wonder that Weltmeyer is considered to be the "Stallion of the Century".