Welt Hit II is one of the most outstanding sons of the great Weltmeyer and in 2004 was awarded the title of VTV Dressage Champion. He possesses the true uphill conformation required for top level dressage competitions, which allows him to perform his movements with such ease and grace.

Welt Hit II is by the outstanding dressage stallion Weltmeyer, one of the most influential stallions in the Hanoverian breed today, having sired over 88 graded sons. He has such illustrious sons as Wall Street, Weltburger, Wee Weltmeyer, Weserperle S, Wesley, Welt Hit I O, III, IV, V and Wolkenkranz to name but a few. Weltmeyer's sire World Cup I (full brother to White Foot's sire World Cup III) sired 16 graded stallions including not only Weltmeyer but also Walt Disney I, Walt Disney II and Warkant. His international dressage representatives include Welcome, Without A Doubt, Watusi and Waltzerkoenig and his progeny have won over £310,000 to date in competition. Welt Hit II's dam Cileste was by the Irish Thoroughbred Hill Hawk XX who was one of the most successful 'improving' stallions at the Hanoverian State Stud at Celle . He produced 5 graded sons plus the international dressage horse Highness and the international eventers High Point and High Prince and his dressage BLUP of 125 is very high for a Thoroughbred stallion.

Welt Hit II was Reserve Champion in his Performance Test, gaining a top dressage mark of 140 in the autumn of 1995. The tremendous promise he showed has been borne out in his many achievements since, including being top 4 year old stallion in the German Championships at Warendorf in 1996, taking the Dressage Champion title at the Zwolle International Stallion Show in 1997 and being top 6 year old at Warendorf in 1998. He is now competing at Grand Prix level.

After he showed his first crop of foals in 1996, his offspring have been very popular with both breeders and raisers. Several were already sold for huge sums at the Vechta auctions in Oldenburg. Race, presence and movements are the identifiers of his progeny. In 1998 a son of Welt Hit II was champion of the foal selection in Arnhem. Welt Hit ll has already more than 15 approved sons. In the sport the progeny of Welt Hit II are beginning to make their mark. In 1999 a son of Welt Hit II won the landeschampionat and Insa Hansen won the prestigious competition in Rastede with her Welt Hit II product in 2000, 2001 and 2002. In 2002 his son Weltissimo was very successful at the World championship for young horses in Verden and also has several victories at the Prix St. George. In 2004 he was awarded VTV- dressagestallion of the Year In 2001. There were no less than two daughters of Welt Hit II in the top ten at the National mare show in Ermelo. His daughter Rianke (Welt Hit II x Zebulon) took the title for 3 year old dressage horses in Varsseveld. In 2002 a son (damsire Cocktail) was 5th in the championships in Den Bosch. In the VSN 2002 his son Saint Tropez was 3rd and is meanwhile approved by the AES. In 2003 his son Welt Invest (damsire Investment) was second in the ability test for 3-year-old dressage horses in Varsseveld and in the year 2004 he won the title for 4-year-old dressage horses. 2nd in the VSN trophy 2003 and approved by the NRPS in 2004 and now stands at stud on our station. In the autumn of 2004 at the elite auction in Vechta the Brilliant-ring What a Joy was sold for the price of 150.00 in euro's. The daughter Riondine ( mar Ferro) became champion of the Hippiade Z2 dressage and the son Still Here ( mar Vincent) won in 2005 the North Sea oil dressage compitition Z1 dressage. 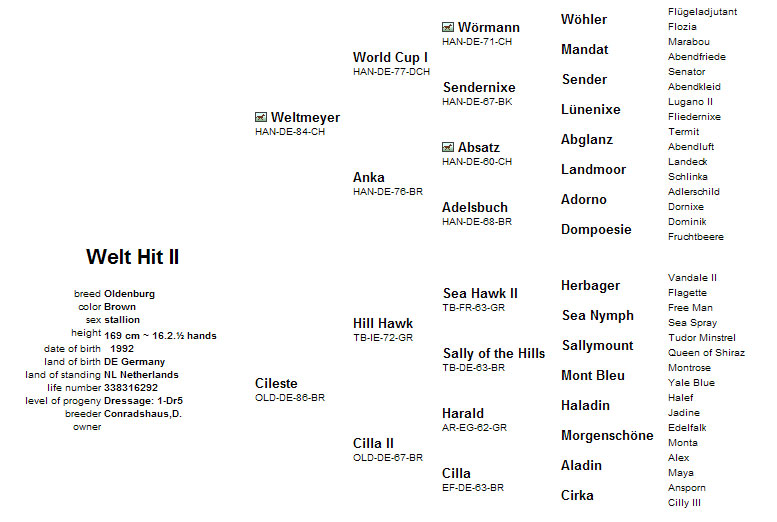