Sunny Boy, the first approved son by the former World and National Champion, Sandro Hit, is following his sire's footsteps in the breeding world.

A stunningly beautiful type, Sunny Boy is direct half-brother to Classico (Sport name Capuccino 16), ridden by Karin Rehbein and already winning at Grand Prix level and is a descendant of one of the most successful mare lineages in German breeding.

His dam Fantastica is full-sister to champion producer Don Schufro (unbeatable since 2001) and has identical bloodlines with Don Primero. Just like his sire Sandro Hit, he has a dominant black gene and passes on his dark coat to his offspring. His progeny show a lot of promise with a dancing quality in their movement and have had numerous top placings in championships, at foal shows and have achieved top prices at various auctions. He already had several approved sons and state premium mares from his first crop of foals; all of which were very impressive due to their interior and good rideability.

The graceful movement, the uphill jumping canter and the calmly performed walk combined with top jumping qualities make him extremely coveted and valuable. Sunny Boy won his 30 day test with a score of 8.9 in Vechta. He confidently qualified for the 2003 National Young Horse Championships and went on to win the small final for six year old dressage horses.

He continues on the road to success; last year winning "M/A" dressage competitions and achieving high placings at "S" level. Sunny Boy already belongs to the top five stallions in the breeding ratings of young stallions on the national squad. 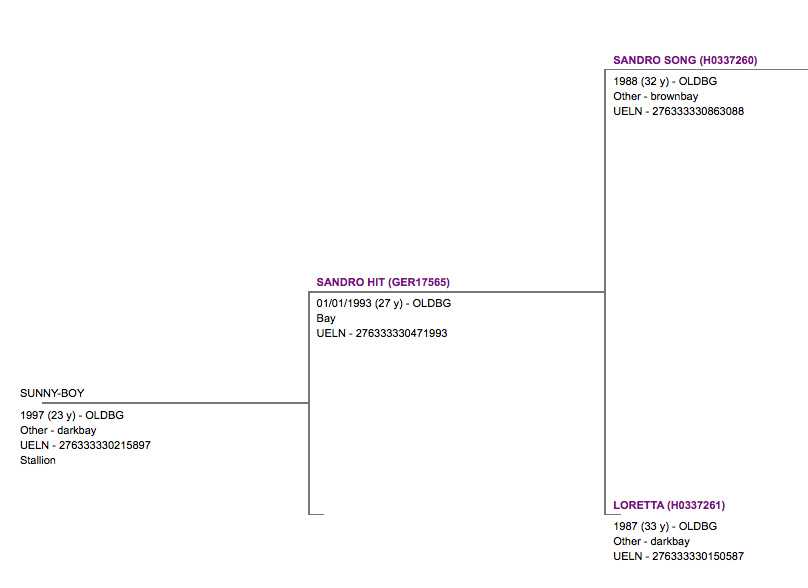