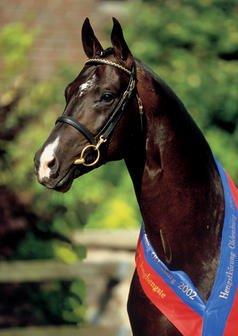 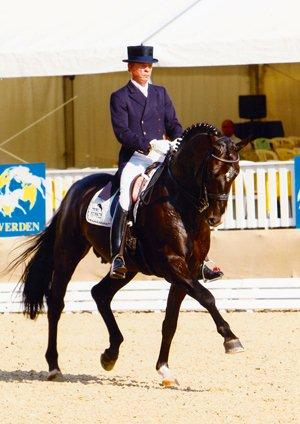 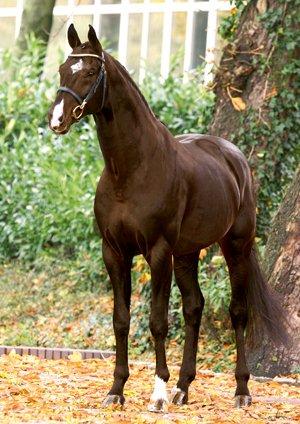 A brilliant movement genius with select ancestors! Stedinger's second crop up for licensing again produced high priced stallions such as the shiny black premium stallion in Münster-Handorf who brought the second highest price of 160,000 Euros. After his sensational debut in 2006 with his imposing son Status Quo who became Champion Stallion, further sons were licensed in Vechta and Neustadt/Dosse. In Mecklenburg he presented a premium stallion and at the Deutsche Sportpferd licensing in Prussendorf a further son was licensed. So far, Stedinger is the sire of twelve licensed sons. His first riding horses have been sold at auctions and the demand for his foals has not slowed down  in Verden nine of his off-spring were in the auction, making him one of the main "suppliers". Five of his foals have qualified for the German Foal Championships and several mares are State Premium candidates. Three of these mares were selected for the Elite Broodmare Show in Rastede where one finished in the Brillantring. Status Quo finished the Oldenburg Stallion Championships as the Reserve Champion, beaten only by a slim margin.

Stedinger was the undisputed Champion Stallion of the licensing event during the Oldenburg Hengsttage in 2002 and the first Reserve Champion for the main premium in 2004. After winning many dressage tests at medium (M) level, he is now being trained by Dieter Weichert for the next level in dressage. In spite of a heavy breeding load, Stedinger did an outstanding job at his 70-day test in Neustadt/Dosse, finishing with a total index of 131 (dressage 130.72 / jumping 121.92) and qualified in 2005 for the Bundeschampionat in the class for German dressage horses in Warendorf.

Stedinger is another fine product from the endeavors of the Sosath breeding station and is a half-brother on his dam's side to Donninger who was licensed in 2004. His dam VPr.St. Bold-Fantasy is a full sister of the dressage stallion Lamar H and a half-sister of the CIC** winning event horse, Just Me H. The line of the Champion Stallion Waldsee (dressage Inter. I) is also known for the Grand Prix horses Andrew, Armagnac and Inschallah B as well as Tansanid, dressage team silver at the 1984 Olympic Games with Christine Stückelberger/CH.