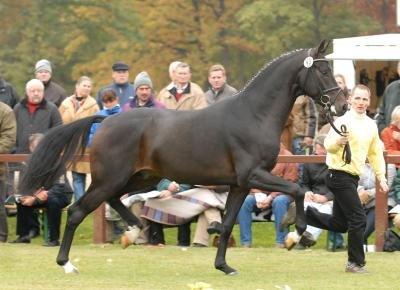 - Aged 2, he wins the supreme championsip of the Hannoverian Koerung in Verden 2007.

Genuine phenomenon, he charmes an enthusiastic public with his exceptional paces and charisma.

- Aged 4, he completes his testing with two 9s for exterieur and paces and 9.5 for temper.

- Aged 6, SOLIMAN qualifies to participate in the German Championship for young dressage horses. The judges award him the very good average of 85%, which ranks him third in the qualifier! He finishes ninth in the final test.

- 8 years old, he starts at Small Tour level. He wins two St Georges competitions at the Grand National of Auvers with more than 71% and 69%! He also ranks at the fifth place for his first International competition at the CDI 3*, in Saumur.

SOLIMAN DE HUS is a horse with an exceptional ability for the dressage discipline. He was dedicated to breeding until the end of his 7th year and he then managed to learn all Grand Prix movements when 8 years old. He is a highly gifted horse, a genius! His goal is without a doubt to participate in the Olympic Games in Rio! Jessica Michel

SOLIMAN DE HUS now has quite a number of his offspring successful in sports and several of his sons are licensed stallions in different countries of Europe and in the United States. He today is a sure value for your mares. SOLIMAN strongly types his offspring with a modern exterieur, chic and very expressive, blood, very good gaits and above all excellent submissiveness! Jessica Michel

A son of SOLIMAN DE HUS out of a mare by FÜRST HEINRICH and WELTMEYER was also licensed during the famous stallion licensing of the Hanoverian society in October 2012. He was also awarded the title of premium stallion, a distinction that only the best licensed stallions receive.

Amongst his licensed sons is also WOODLANDERS SUPERTRAMP, out of a mare ROTSPON, whose first crop received wide approval in the UK. He is stationed in the fabulous stud of the double World Championess WOODLANDERS FAROUCHE. Another example is STERNLICHT GGF (by RASCALINO), first son of SOLIMAN DE HUS to be licensed in the United States.

SOLIMAN DE HUS is also renowned for his quality as damsire: his daughter SOLAIKA (mother by WESLEY) was sold for the historical price of 62 000  during the Hanoverian Elite Auction in August 2013, a price that was never before reached for a broodmare at a Hanoverian Auction!