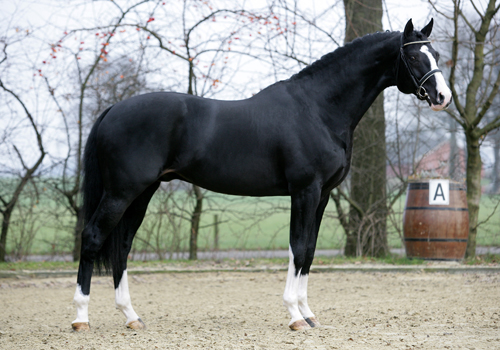 Sir Oldenburg was an audience favourite where he passed his Köerung in Oldenburg in 2000.

He was Premium stallion and placed third in the 30-day stallion performance test at Neustadt-Dosse with a rideability score of 9.0 being only 4 weeks under saddle.

2001 Statechampion of the three-year old stallions from Oldenburg in Rastede under Heiko Klausing.

2002 Reservechampion of the four-year old stallions in Rastede.

He won the Bronze medal at the 2002 Bundeschampionate (Nationals) of four-year old stallions at Warendorf.

In 2003 he qualified for the Bundeschampionate of 5 year old dressage horses in Warendorf under Katrin Burger.

Sir Oldenburg qualified for the Bundeschampionate (National championships) for the 4th time in 2004. After a second place in the minor finale he achieved 12th place in the major finale as "best Oldenburg".

His movement is spectacular with a lot of mechanic and he shows a lot of scope over a fence.

Sir Oldenburg has won dressage tests at M-level with scores of up to 8.8

He is trained at Prix St Georges level.

He has a breeding value index for dressage of 144 points, ranking him amongst the top five percent of the German dressage stallions.

Sir Oldenburg's sire Sion is known in Oldenburg as a highly versatile sire. His highly noble progeny have shown great success in Dressage, Show jumping and eventing as well as being a quality fixture at the Vechta elite auctions. Sion has presented a high number of licensed sons as well as the 1995 Elite mare show winner Viktoria B.

Sion belongs to one of the established dressage progenitors within the Oldenburger breeding and further establishes the line of sire Sultan. Sion is Dutch bred out of the renowned Trichta-line (NL-029).

Sir Oldenburgs dam sire, Contender, needs no introduction. He has been at the forefront of breeding in Germany for several years. Contender won his 100 day test in Adelheidsdorf in 1987 and has been highly rated by the German FN for several years in both dressage and jumping statistics.

From the dam side in the third generation, there is again Holsteiner jumping blood via the stallion Tin Rocco (Tin Rod xx - Roman) who is famous for being the sire of the renowned showjumper Let's Go with Roelof Bril.

The line on the dam's side goes back to the Gelders mare Gunetta II via the Thoroughbred stallion Apollo xx. Gunetta II also enjoys nororiety as the dam of the Oldenburg stallion Grand Slam (Gradios) who was sucessful in dressage.

In January 2010, Sir Oldenburg moved to stand in Sweden. 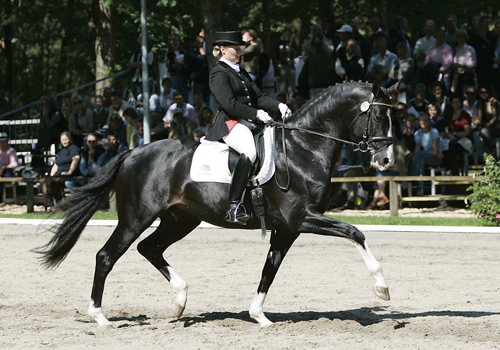 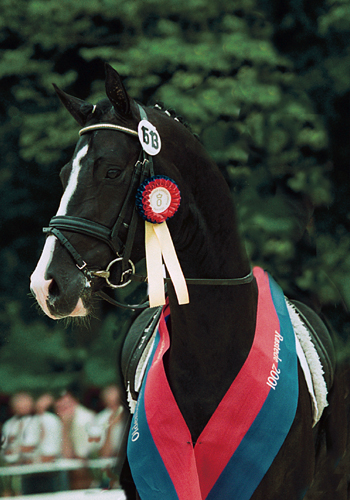