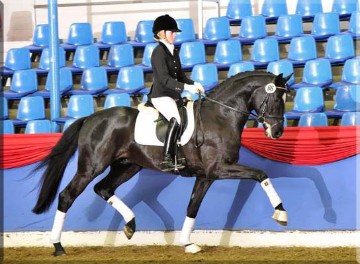 With Scuderia, we present the Reserve Champion of the Oldenburg Spring licensing 2012.

Via Sir Donnerhall - Escudo he is bred with performance and his conformation is foremost the choice of the pairing and, no question, very sportive oriented.

Born in Great Britain at the Active Equestrian Stud, he descends from our dam line "Cabanda" that is maintained for decades in our yard. A variety of stallions like Pik Bube I and II, as well as the Westphalian champion stallion 2011 Dubrovnik NRW find their origins here.

But there are competition horses that have brought this line great renown. Currently, there are sure Santana with Minna Telde, Olympian for Sweden, or Blue Hors Rebelle, Oldenburg Champion Mare and World Cup finalist, who caused for sensations.

Scuderia is a very light-footed and easy to work stallion which moves with a lot of ground preassure and looseness in his joints. The feeling that he conveys his rider is simply only to describe as pleasure.

This was also confirmed in his 30-day test. 8.93 was the dressage final score, 146 points breeding value. Both test riders gave him a smooth 10.0, what finally was making him to the overall winner in dressage. 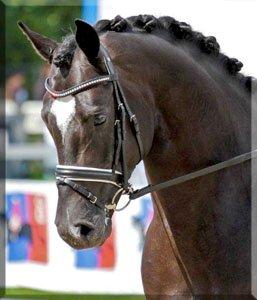