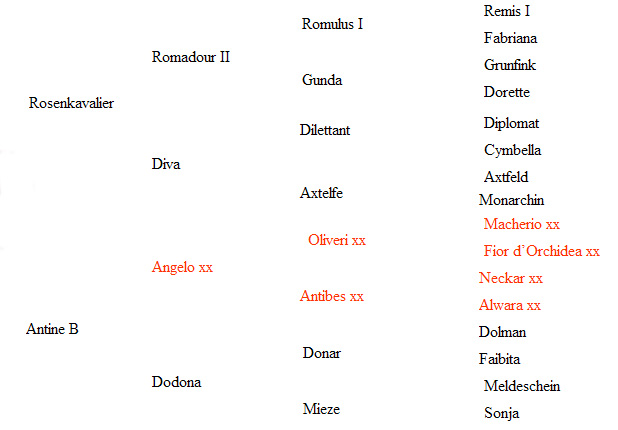 Westphalian, Oldenburg, Hessen, Hanovarian, Bavarian, Baden-Wurttemberg, Trakehner, KWPN, Rubinstein I is a son of the Westphalian Romadour II. son Rosenkavalier. who was a stallion performance test winner and is considered to be one of the most significant Westphalian sires today He was reared from the probably most eminent dressage dynasty world-wide The dam Antime is a full-sister of the top international dressage horse Ahlerich 2 / Dr. Reiner Klimke and Amon / Annemarie Sanders-Keyzer (NL). She later produced 2 further stallion sons, Rubinstein II (Sanders-Keyzer stables / NL) and Rubinstein III. Her full-sister Adone gave birth to the multiple Olympics champion Rembrandt 24 / Nicole Uphoff as well as the stallions Royal Angelo I and II (Westphalia) respectively. the top dressage horses Ramon 64 / Uta Wusthof and Rosario 14/ Sabine Ruben. The stallions Romancier and Ritterstern (Denmark). Rhythmic Dancer (Austria) as well as Flower King D (NL) and numerous other performance horses also represent this dynasty.

Already at a young age, Rubinstein can look back upon a tailor-made career. He was winner of the Optimum of Conformation Show Horses in Munster in 1990,1-a main premium winner in Oldenburg. vice-champion German dressage horse in Verden in 1992, multiple Oldenburg dressage champion, series winner of dressage competitions up to advanced class and multiple Intermediaire II and Grand Prix winner Meanwhile Rubinstein I is winning one dressage competition after the other with his rider Nicole Uphoff in the international dressage arena This pair belongs to the German dressage establishment.

Rubinstein I began an exemplary siring career There are meanwhile more then 400 mares sired by him registered in the studbooks of German breeders associations About 60 sons have been approved, including stallion performance test winners and riding horse championship winners The son Rohdiamant was 1992 Oldenburg approvals champion, 1993 winner of the Federal German Riding Horse Championships in Mannheim and the 1995 federal champion dressage horse in Warendorf He has moreover presented numerous additional successful Federal Championship contestants such as Regazzoni and Rubins Ass, who respectively became the 1995 and 1996 vice-champions of the stallion classification of riding horses Renomee and the approved Rubioso N were vice-champion six-year-old dressage horses in 1997 and 1998 respectively The approved sons Rubin Star N, Royal Diamond, Regazzoni, Rubinstar and Rotspon were each respectively winners of their stallion performance tests Rubinstein I progeny have frequently dominated activities at auctions The approved Rosenstar S was the top lot at the 1994 Vechta autumn auction at DM 200,000, (£70,000) while Rubins Ass was the highest priced horse of the Twentieth Special Vechta Auction in 1995 and the likewise approved Rocher dOr attained top price in the spring of 1996 For the 5th time, a Rubinstein I son became winner of the Oldenburg Young Stallion Approvals in 1997

Rubinstein is known as a great improver for the breed. He consistently passes on his wonderful temperament and movement. The youngstock of Rubinstein are very popular with riders professional and amateur for their willingness to please.