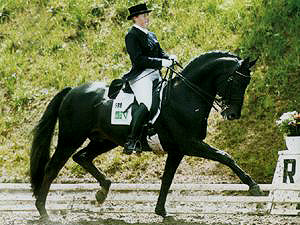 He is the ONLY stallion standing in Britain to have WON his 100 day performance test with amazingly high marks in both dressage and the showjumping sections. He also scored a maximum of 10 points for his temperament and willingness to learn.

Rubin Star N is the ONLY approved direct son of the influential, outstanding Rubinstein 1, who has had an undoubted impact on the modern day dressage breeding throughout the world before his untimely death in 2000. Rubinstein 1 is the sire of Relevant, Rusty, Rhodiamant, Royal Diamond etc. Rubin Star N's dam Carella, was by Ramino, who himself won his performance test in 1983 and then went on to win the team gold in the European Junior Showjumping Championships in 1987 and he was also the Italian Showjumping Champion 5 times between 1989 and 1995. Ramino's sire Ramiro has been very influential and dominant in the breeding of many top showjumping pedigrees and is very sought after. Carella's other grand-sire Weltmeister produced many overriding competition sport horses and stallions such as Welt As and Westminster. The dam line also produce the Olympic horse Calwaro.

Rubin Star N is the full brother to the 1997 Oldenburg Stallion Approval Vice-Champion Ronaldo, who is now competing at Grand Prix level and stands in The Netherlands. His full sister Cherubina was the dam of the state stud stallion Levados and another full sister was the winner of the Bundeschampionat final.

Rubin Star N himself has successfully competed at intermediate 1 level and was himself highly placed in the final of the Bundeschampionat final. He was the series winner and most successful dressage stallion in his age group at the DHV Stallion Tournament in Euskirchen. He is now training at Grand Prix level.

He passes onto his offspring besides the dark jacket, his outstanding, smooth cadence, powerful, elastic paces, his wonderful temperament and easy trainability. This has ensured that he has produced numerous overall winners. The oldest of his progeny are now competing at medium level in both disciplines and his 6 year daughter, Rossini, was the 2003 Dressage Champion at Nordlingen. His son Rock Star was a premium approved stallion at the 2003 stallion approval in Hessen. His foals are regularly champions at the foal shows. RUBIN STAR N

In 2002, the heritability assessment of the Equestrian Association would indicate that the future is his. A score of 141 points in dressage is a manifestation of the brilliant future prognosis for him and at the same time his jumping score of 122 points is above average. His dressage score also secured him the highest ranking heritability assessment for dressage among all stallions kept in the Hessen area of Germany .

In 2005 the champion dressage horse Rossini at the age of 8 years started winning at grand prix level. This year also saw the first of the british bred foals by Rubin Star N being born. They are already gaining the prestigious "PREMIUM" status from the Oldenburg Society. His daughter Romany (Play The) also has made her mark in the showing world by winning the Reserve Amateur Home Produced Championship and the Reserve Riding Horse Championship at the BRITISH NATIONAL FOAL OF THE YEAR SHOW.