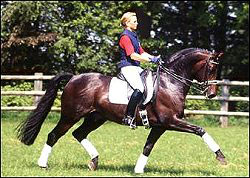 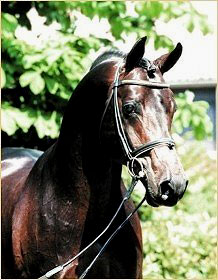 His sire Rubinstein I's noble descent from the most successful dressage family of the world, namely that of Dodona, the dam and at the same time grandam of the multiple Olympic medallists Ahlerich 2/Dr. Reiner Klimke and Rembrandt/ Nicole Uphoff, was from the outset, one of the most popular sires that was ever stationed in Oldenburg. Following an outstanding stallion performance test and an excellent first crop of foals, he was the overwhelming main premium winner in 1990. Aged three, he was the Westphalian conformation champion and thereafter won dressage horse competitions up to intermediate level in series, prior to becoming the federal vice-champion 6-year-old dressage horse, true to his absolute dressage origins in Verden in 1992. His first stallion age-class was presented for approval in 1992, with five of them gaining the coveted title straight out, including Rubirando, who was part of the premium lot and Rohdiamant, the Oldenburg approvals champion. Rohdiamant's damsire is the top class Anglo-Arabian sire Inschallah AA.

Following his approval victory in 1992, Rohdiamant embarked on a steep and successful sports career. In 1993 Rohdiamant won the Oldenburg State Riding Horse Championships in Rastede, became a federal champion in Mannheim and thereafter vice-champion of his stallion performance test. The following year, in 1994, he became state champion four-year-old dressage horse and main premium winner in Oldenburg, whereas in 1995 he was both state and federal champion five-year-old dressage horse, as well as champion of the Nobilis Cup for young dressage horses in Bremen. Then, in 1996 he was placed sixth in the finals of the Federal six-year-old Championships. Aged seven, he already had great successes in advanced dressage. This was followed in 1998 by wins and high placements in Prix St. Georges and Interm6diaire I. The 2000 season brought quite a few Grand Prix successes. Important stages: 1992 - Approval winner in Oldenburg. 1993 - German Champion and Reserve Champion at the stallion performance test (dressage index 150.00 points). 1994 - Main Premium winner in Oldenburg. 1995 - German Champion of 5 year old dressage horses. 1996 - 2002 - Rohdiamant and Lisa Wilcox firmly established themselves on the international dressage scene. Rohdiamant's life time prize money up to Sept. 30, 2002: 70,514.00.euro

Rohdiamant presented a large number of premium foals from his first crops, as well as the top-priced lot of the May 1994 Vechta auction who has meanwhile been approved under the name of Rabano and was awarded the I-e premium at the Oldenburg Stallion Days. 1998 was Rohdiamant's year. His daughter Reine Seide was champion mare of the Oldenburg elite mare show, whereas his stallion son Roman Nature with the Rhenic brand was federal champion three-yearold stallion and Royal Dance won the Oldenburgjunior stallion approval. In 1999, his son Ronaldo first became state champion and then federal champion German riding horse and in 2000 became vice-champion five year-old dressage horse. In 1999, Rohdiamant's daughter Ramina K first became federal vice-champion before being sold for DM.300,000 at the Hanoverian elite auction in Verden. Following his successful participation at both the state and federal championships in 2000, Rohdiamant's son Royal O1ymp was sold for the record price of DM.520,000 at the Vechta autumn auction and became premium stallion at the Oldenburg stallion days. His tally of successes thus far amounts to 35 state premium mares and 16 approved sons. The FN breeding value rating has listed Rohdiamant in the forefront of the dressage index nation wide for years now. Based on his numerous approved sons (26), Champion and Reserve Champion stallions, State Premium (46) and Brilliantring mares, top auction horses and German Champions, Rohdiamant can rightfully be called a trademark stallion. He passes on his type and presence, his rideability and especially his enormous movement dynamics to his off-spring. 210 of his 529 registered show horses have won  94,246.00 in prize money so far. 8 of his off-spring have been successful in advanced level dressage. Most successful off-spring: Reine Seide (2000 Oldenburg Champion mare), Ron William (2001 Oldenburg Champion stallion), Rubin Royal (2001 Main Premium winner), Romanov (2002 Oldenburg Reserve Champion stallion), Rosabella (Devon/USA, Champion of 4 and 5 year old Mares Materiale), Farodie (2002 Oldenburg Reserve Champion mare), Rosenberg (dam by Ramino, Champion Stallion at the British Warmblood approval).