One of the noted sons of Rohdiamant who was the highest prices stallion in 2003 sold for 90,000 euros to Paul Sprehe, he competed at M level with Kitty Bottcher his winnings amounting to 2,113.00 Euros. In his short breeding career he produced five offspring in sport whose winnings reached 2358.00 euro. 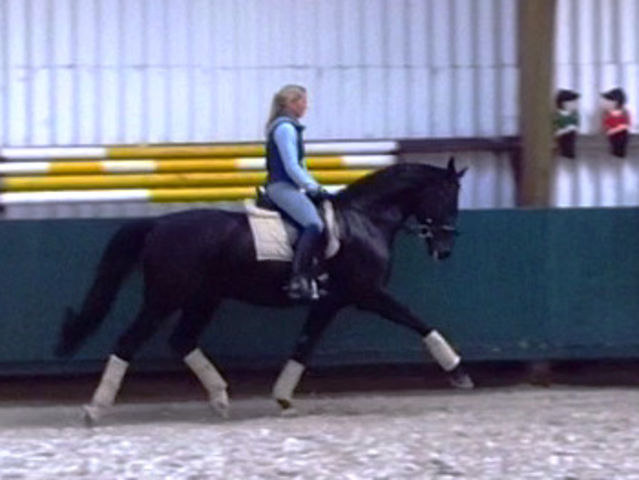 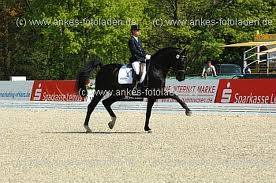 Rohdiamant -PERFORMANCE: Following his approval victory in 1992, Rohdiamant embarked on a steep and successful sports career. In 1993 Rohdiamant won the Oldenburg State Riding Horse Championships in Rastede, became a federal champion in Mannheim and thereafter vice-champion of his stallion performance test. The following year, in 1994, he became state champion four-year-old dressage horse and main premium winner in Oldenburg, whereas in 1995 he was both state and federal champion five-year-old dressage horse, as well as champion of the Nobilis Cup for young dressage horses in Bremen. Then, in 1996 he was placed sixth in the finals of the Federal six-year-old Championships. Aged seven, he already had great successes in advanced dressage. This was followed in 1998 by wins and high placements in Prix St. Georges and Interm6diaire I. The 2000 season brought quite a few Grand Prix successes. Important stages: 1992 - Approval winner in Oldenburg. 1993 - German Champion and Reserve Champion at the stallion performance test (dressage index 150.00 points). 1994 - Main Premium winner in Oldenburg. 1995 - German Champion of 5 year old dressage horses. 1996 - 2002 - Rohdiamant and Lisa Wilcox firmly established themselves on the international dressage scene. Rohdiamant's life time prize money up to Sept. 30, 2002: 70,514.00.euro

PROGENY: Rohdiamant presented a large number of premium foals from his first crops, as well as the top-priced lot of the May 1994 Vechta auction who has meanwhile been approved under the name of Rabano and was awarded the I-e premium at the Oldenburg Stallion Days. 1998 was Rohdiamant's year. His daughter Reine Seide was champion mare of the Oldenburg elite mare show, whereas his stallion son Roman Nature with the Rhenic brand was federal champion three-yearold stallion and Royal Dance won the Oldenburgjunior stallion approval. In 1999, his son Ronaldo first became state champion and then federal champion German riding horse and in 2000 became vice-champion five year-old dressage horse. In 1999, Rohdiamant's daughter Ramina K first became federal vice-champion before being sold for DM.300,000 at the Hanoverian elite auction in Verden.

Following his successful participation at both the state and federal championships in 2000, Rohdiamant's son Royal O1ymp was sold for the record price of DM.520,000 at the Vechta autumn auction and became premium stallion at the Oldenburg stallion days. His tally of successes thus far amounts to 35 state premium mares and 16 approved sons. The FN breeding value rating has listed Rohdiamant in the forefront of the dressage index nation wide for years now.