Pedigree, performance, and most importantly an incredibly strong record as a sire make Olivi a top contender for dressage breeders. Olivi is sired by Jazz, one of the most significant sires in modern dressage breeding. An international competitor himself, Jazz currently stands #1 on the WBFSH Dressage Sire Rankings and is the sire of international stars such as Johnson, Parzival, and Vancouver K. Jazz's sire Cocktail was also a successful Grand Prix horse under Anky van Grunsven.

Olivi's dam descends from the famous Utopia mare line, one of Holland's prized mare families that produced both dressage horses and jumpers. Famous stallions such as Vivaldi and Arko III also come from the Utopia mare line. Olivi's damsire Aktion competed in the European Championships, World Equestrian Games, and Olympics.

Olivi was Reserve Champion of his KWPN Stallion Selection. His competition record includes placings in the PAVO Cup Finals, the French Young Rider Championships, and at the CDI Grand Prix level.

Olivi's offspring have earned him the incredibly high Dressage Index of 175 and he stands 2nd behind his sire on the KWPN Sire Rankings and was ranked 18th on the 2018 WBFSH Dressage Sire Rankings. He has sired many Keur/Elite daughters, two approved sons, and is the damsire for additional licensed stallions. His offspring have been consistent winners from the Young Horse classes up through Grand Prix in both Europe and the US. In 2018, the Olivi son Triviant competed at the World Cup Finals & World Equestrian Games, Zo'dan won the Intermediate I AA Championships for USDF Region 6, and almost all of his US-born offspring earned First Premium at their keurings. 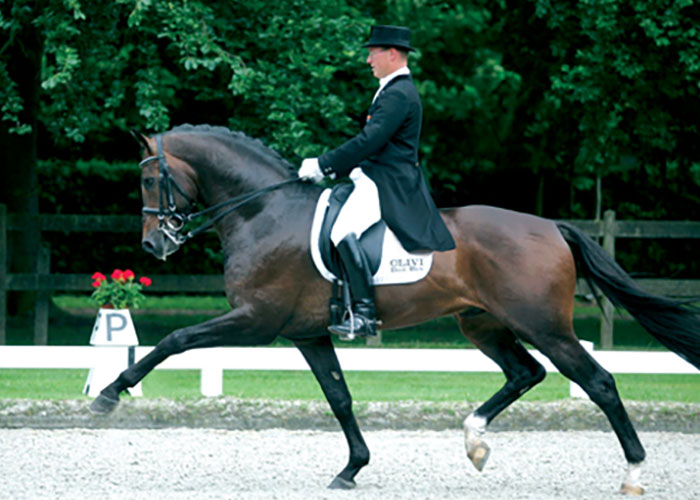