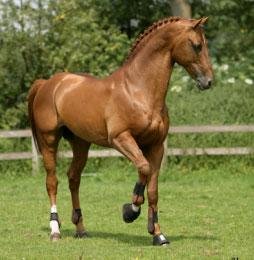 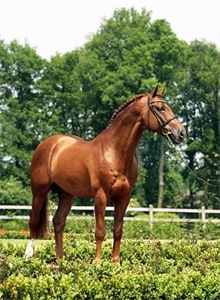 The sire of Nassau is the very famous Indoctro, who, with his sire Capitol and grandsire Caletto, belong to the world's top showjumper progenitors. His dam, Gazelle, comes out of the world famous Jolanda ('keur, pref. prest.') of Roel Hagedoorn in Wierden. Jolanda produced, amongst others, the following sport horses: Old Mac (by Mister Wilfred xx) who jumps at 1.40m. level and the international showjumpers Happy Sound (by Lucky Boy xx), Servus (by Lucky Boy xx), My Man (by Tangelo xx) and Cool Cat (by Gurioso). In addition there is the international dressage horse Darwin (by Tangelo xx) and the approved stud stallions Vasco (by Gag xx), who jumps at 1.40m. level, and Hamar (by Mytens xx).

Nassau's dam (Gazelle) gained the predicate of "preferent prestatie" in 2002. Nassau progenitors receive a lot of his quality. From the first crop 15 horses registrated in studbook, 9 times "ster" predicate and one approved son Thunderbolt. With that he scores very high, above the average, for exterior and action. He is much valued, the trot is powerful and well-carried.

Nassau is producing Champions in Jumping and Dressage. Nassau is shown Internationally by Jeroen Dubbledam, a 2000 Olympic Gold Medalist

Nassau in the News

Nassau wins Outdoor Gelderland Championship living up to his "Horse of the Year" Title.

BMC Nassau: Third in Europe, second in Holland and first in the Rabo Rankings. "Because of their fantastic performance during the National Championships."

Quailhurst Europe/Gebr. van Manen Stallion "BMC Nassau" jumped to win the silver at the Dutch National Championships. He missed the gold by 1/10 of a second.