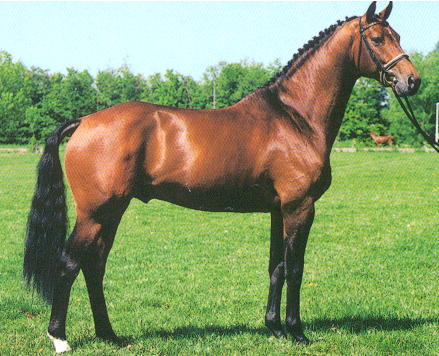 Landor S has outstanding conformation and exceptional jumping ability, reflecting his pedigree. He has two approved full brothers Landwerder (USA) and Lagoheidor (NL, Champion of his 100 day tests), both competing at Grand Prix Dressage level, and Laertes jumping at top national level. Landor S possesses an outstanding temperament, exuding great presence with a desire to please - great elements which he passes on to his offspring.

His sire is the outstanding Holstein, Landadel, who features 6th in the WBFSH Top 10 Jumping Sires 1999/2000 and has progeny that have won over £1,230,000 to date. He is by the great sire Landgraf I, who features, like his sire Ladykiller XX, behind so many of today?s sport horses across all disciplines. His dam has such great sires as Gotthard behind her, a legend in German sport horse breeding being the sire of such world class jumpers as Goldika, Goya, Queensway and Genius. As her maternal grandsire the outstanding Furioso II, the sire of such outstanding horses as Voltaire, second in the World Breeding Rankings for Showjumpers in 1996, and the great showjumper For Pleasure.

Landor S achieved a very good score of 133.84 for jumping in his 100 day performance tests in 1994 and an overall mark of 124.23. In 1995 he won further tests for jumping and the Championship in Oldenburg for young stallions. Landor S captured more championships in 1996/97, finishing with the coveted title of Champion Sport Horse of the Year. He continued to perform at the highest level, adding further championships in the next three years and is now competing successfully in S level (German Grade A) showjumping, having won over £6,000. 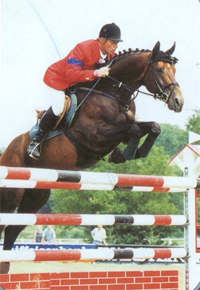 Landor S is continuously sharpening his profile as a top sire who belongs in a special class. His off-spring have long reached the international stage ? Lobster and Lara G won many ribbons in Grand Prix under Sören Pedersen in 2007. Lauterbach, the 2004 OS Champion Stallion, was victorious in the 2007 French Championships and Lagero became State Champion and Weser-Ems Champion with Gerd Wehlau. Among Landor S' off-spring are also the European Championships gold winning Loriot S (Tobias Meyer) as well as the internationally successful sport horses Lord G, Loup Garou, Grandora (Mylène Diederichsmeyer) and Leoville (Philipp Weishaupt). At a price of 101,000 Euros, a non-licensed stallion was the highest priced horse in Marbach. At the Deutsche Sportpferd licensing in Prussendorf, another son was licensed and in Oldenburg many licensed and premium stallions were out of Landor S daughters. Landor S has sired more than 30 licensed sons so far. His daughter Lady Heida was the 2002 German Champion Mare with emphasis on jumping.

Landor S is proving to be a top eventing sire, his son Le Carre was German Bundeschampion 2009. His son L' Arc de Triomphe also a succesful sire of eventers in France, his offspring dominating age classes in France.

A truly outstanding stallion with a proven record as a top producer. 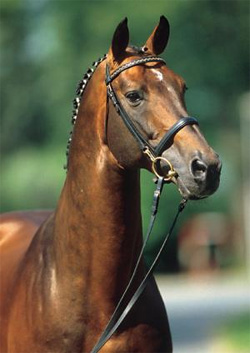 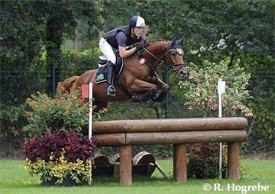 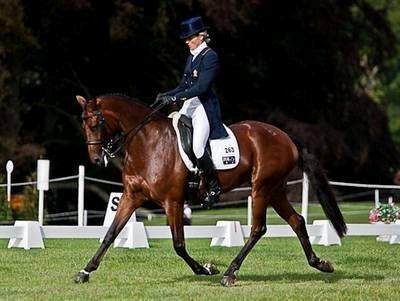