Escolar takes command of the scene today like practically no other stallion. In 2012 Escolar made his debut at shows with results that would be hard to beat: He won one test for young riding horses after the other, in Lingen, Cloppenburg and Münster-Handorf, where the judges didn't hesitate to give the highest possible score of 10.0. Just decorated with the Westphalian Champion title, Escolar and his trainer, Hermann Burger, went to Warendorf where they again demonstrated their special status at the Bundeschampionat in the class for three-year old stallions. "What you see here is the best possible development of impulsion, cadence and perfect rhythm", commented Dr. Dietrich Plewa in the name of the judges who pulled a 10.0 out of their hats for his trot and canter. They also gave him a very good (9.0) for his state of training and the harmony of his presentation, an 8.5 for conformation and an 8.0 for his walk. Even the guest riders, Kim Pfeiffer and Marcus Hermes, were impressed and gave him 19.5 of 20 possible points. With a result like that and a clear margin to his competitors, the winner's sash was wrapped around Escolar's neck at the unofficial German Championships for young horses.

Escolar jumped right to the top of the FN's breeding value estimation with his first breeding value of 169. He owes this clean sweep to his own successes. Starting with double gold at the German riding horse Championship and then silver at the Burg Cup finale under Hubertus Schmidt, although the audience in the sold out Festhalle Frankfurt wanted him as the winner.

Escolar has been selected for the Olympics!! 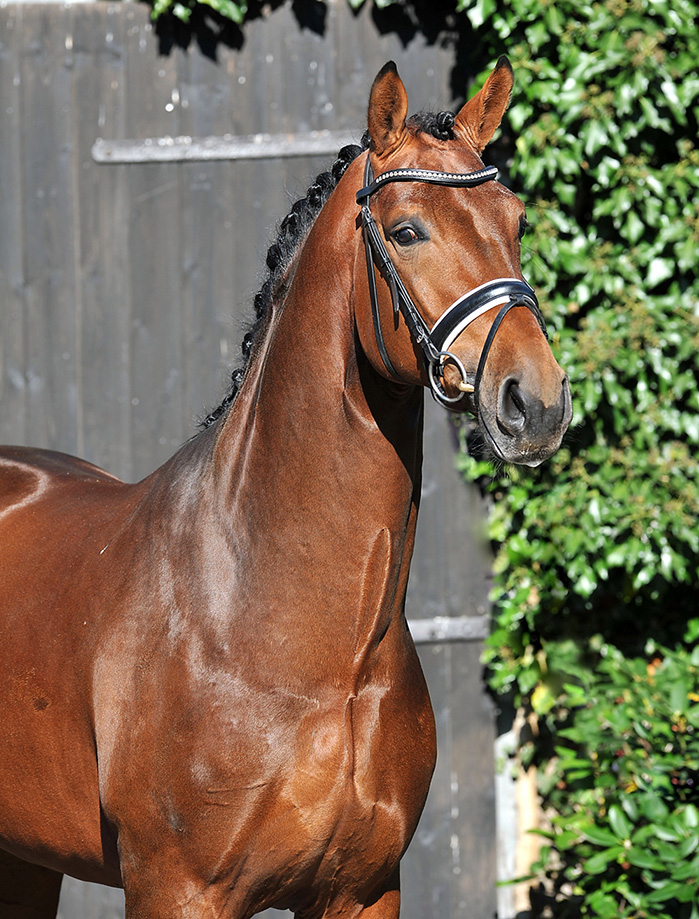