Donnerhall is the most successful dressage horse in the world and looks back on an exemplary career. He managed like no other sire of his generation to combine success in breeding and in sport alike. It is nearly impossible to provide a complete survey of Donnerhall's breeding record here, as it would necessitate the writing of a separate book. In Germany alone he has produced over 50 approved stallion sonsand more than 35 State Premium Mares. 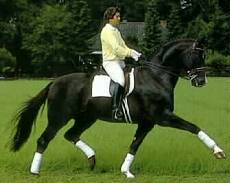 When a colt by Donnerwetter out of Ninette by Markus-Carnot was born at Otto Gärtner's stud farm in Wenstein, Holstein on the 30th of May 1981, no-one could have imagined that the dark chestnut who was later christened Donnerhall, would one day stage a triumphant march through the equestrian world like no stallion before him. What's more, no other stallion has ever come close to achieving what the chocolate coloured chestnut Donnerhall managed in such a convincing manner, namely, the symbiosis of the dual qualities of being a successful competition sports horse and on the other hand being a top grade breeding horse. It was undoubtedly an encounter determined by destiny, that Donnerhall grew up on the memorable Otto Schulte-Frohlinde's Grönwoldhof studfarm.

At the 1998 World Championships in Rome, Karin Rehbein and the meanwhile 17-year old stallion were once more part of the German gold medal team and gained an excellent fourth place in the individual rating. His sporting successes, substantiated by his life winnings of around DM 640,000 are no less significant than his importance as a hereditary transmitter. His breeding tally includes 77 approved sons, while of the more than 450 registered mares, 84 were awarded the state premium, including the champion mares Primavera and Hallo. In excess of 300 progeny have moreover been registered as sports horses. Donnerhall's last public appearance under his rider Karin Rehbein at the gala evening of the 1998 Oldenburg approval, where children with lanterns formed a narrow passage through which Donnerhall strode magnificently, remains a warm and unforgettable memory. From that time onwards, he only fulfilled his duties as a sire at the Grönwohldhof, where his remarkable career had begun. On the 14Th of January 2002, Donnerhall perished from acute intestinal toxicopathy. Donnerhall, who was already a legend during his own lifetime has passed away but his memory lingers on... 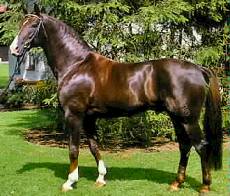 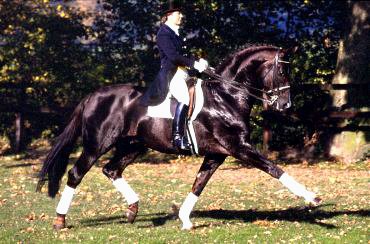