Converter is the current Oldenburger County Champion and second best German stallion in his age group at the World Young Horse Championships in Lanaken. His sporty appearance and a performance-orientated pedigree makes him particularly attractive. His sire Contender ranks as one of the most sought after stallions in Germany today, producing top dressage and jumping horses in series production. He is closely related to the international top star Shutterfly, the extremely successful mare ridden by Meredith Michaels-Beerbaum and in 2003the second most successful showjumper in Germany. At his 30-day test in Adelsheidsdorf he confirmed the high hopes expected of him, as he won the jumping test easily and received the top score of ten twice. His impressive rideability plays a large role for his future career in the sport as well as in the breeding. Converters first crop of foals have been very impressive and were awarded with excellence at the 2005 approvals. Three beautiful sons were approved from his first approval year. The apprived Conquestator (by Converter-Cassini) was the most expensive stallion at the 2006 AOS- Auction. 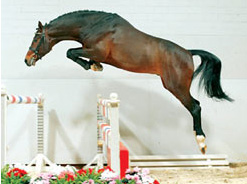 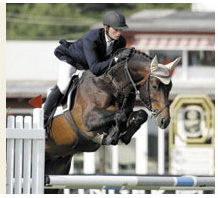